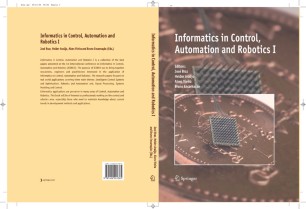 INFORMATICS IN CONTROL, AUTOMATION AND ROBOTICS I

The present book includes a set of selected papers from the first “International Conference on Informatics in Control Automation and Robotics” (ICINCO 2004), held in Setúbal, Portugal, from 25 to 28 August 2004. The conference was organized in three simultaneous tracks: “Intelligent Control Systems and Optimization”, “Robotics and Automation” and “Systems Modeling, Signal Processing and Control”. The book is based on the same structure. Although ICINCO 2004 received 311 paper submissions, from 51 different countries in all continents, only 115 where accepted as full papers. From those, only 29 were selected for inclusion in this book, based on the classifications provided by the Program Committee. The selected papers also reflect the interdisciplinary nature of the conference. The diversity of topics is an importante feature of this conference, enabling an overall perception of several important scientific and technological trends. These high quality standards will be maintained and reinforced at ICINCO 2005, to be held in Barcelona, Spain, and in future editions of this conference. Furthermore, ICINCO 2004 included 6 plenary keynote lectures and 2 tutorials, given by internationally recognized researchers. Their presentations represented an important contribution to increasing the overall quality of the conference, and are partially included in the first section of the book.