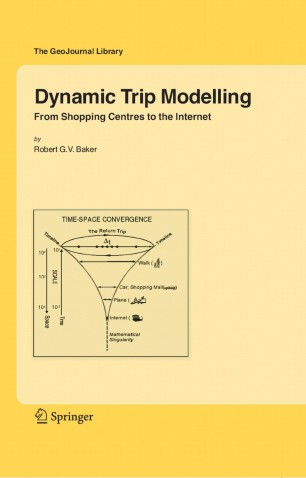 From Shopping Centres to the Internet

Part of the The GeoJournal Library book series (GEJL, volume 84)

The thesis of this book is that there are one set of equations that can define any trip between an origin and destination. The idea originally came from work that I did when applying the hydrodynamic analogy to study congested traffic flows in 1981. However, I was disappointed to find out that much of the mathematical work had already been done decades earlier. When I looked for a new application, I realised that shopping centre demand could be like a longitudinal wave, governed by centre opening and closing times. Further, a solution to the differential equation was the gravity model and this suggested that time was somehow part of distance decay. This was published in 1985 and represented a different approach to spatial interaction modelling. The next step was to translate the abstract theory into something that could be tested empirically. To this end, I am grateful to my Ph. D supervisor, Professor Barry Garner who taught me that it is not sufficient just to have a theoretical model. This book is an outcome of this on-going quest to look at how the evolution of the model performs against real world data. This is a far more difficult process than numerical simulations, but the results have been more valuable to policy formulation, and closer to what I think is spatial science. The testing and application of the model required the compilation of shopping centre surveys and an Internet data set.