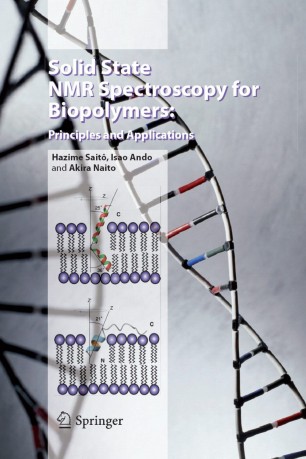 When considering the biological significance and industrial and medical applications of biopolymers, it is crucial to know details of their secondary structure, dynamics and assembly. The biopolymers include globular, membrane and fibrous proteins, polypeptides, nucleic acids, polysaccharides and lipids. Solid state NMR spectroscopy has proved to be the most suitable and unrivaled means for investigations of biopolymers. The major advantage of solid state NMR spectroscopy is that the resulting line widths can be manipulated experimentally and are not influenced by motional fluctuation of proteins under consideration as a whole.

Solid State NMR Spectroscopy for Biopolymers: Principles and Applications provides a comprehensive account on how the conformation and dynamics of such biopolymers can be revealed by solid state NMR spectroscopy. Special efforts have been made towards the historical and chronological consequences of a variety of applications and the dynamic aspects of the biopolymer system. In particular, the authors emphasise how important it is to record the most simple DD-MAS (one pulse excitation with high power decoupling) as a mean of locating very flexible portions of membrane proteins and membrane associated peptides. The authors also demonstrate that dynamic features of membrane proteins with a timescale of fast (108 Hz) and intermediate (104 -105 Hz) fluctuation motions can be revealed easily by specific suppression of peaks.

This book is an invaluable resource for biophysicists, biochemists and chemists, including NMR spectroscopists, structural biologists, and polymer scientists. The book provides an introduction suitable for graduate students as well as for research scientists, including those working in the pharmaceutical and chemical industries.