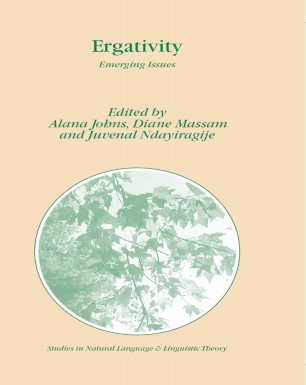 This volume presents a collection of papers on the enticing and complex theme of Ergativity. The papers exemplify theoretical depth applied to a wide range of languages, with the majority of papers based on original fieldwork. Ergativity refers to a grammatical pattern in which the logical subject of intransitive clauses and the logical object of transitive clauses share some grammatical features, and in this respect differ from transitive subjects. The shared features are often case and/or agreement, but a variety of other relevant features have also been isolated in the literature. The ergative pattern contrasts with that found in accusative languages where the subject has the same grammatical marking in intransitive and transitive clauses, while the object has different marking. Ergativity provides us with an ideal testing ground for claims about the range and limits of language variation, and about the degree of elasticity in the morphology-syntax interface. However, because an understanding of ergativity rests on an understanding of other difficult grammatical issues such as grammatical relations, transitivity, aspect, person, case, and agreement, a clear and integrated analysis of the phenomenon has remained elusive. Since Dixon’s (1967/1972) pioneer study of Dyirbal, extensive research has been conducted on a variety of ergative languages over the world from both descriptive, typological, and theoretical perspectives (see inter alia Anderson 1976, Silverstein 1976, Comrie 1978, Dixon 1979, 1994, DeLancey 1981, Marantz 1984, Levin & Massam 1985, Johns 1992, Bittner and Hale 1996, to name a few).

"...an important and valuable resource due to two factors: (i) its theoretical import concerning issues related to ergativity, and (ii) data from many endangered languages, often coming from the author's own fieldwork." (Patrycja Jablonska, LinguistList 19.2107)