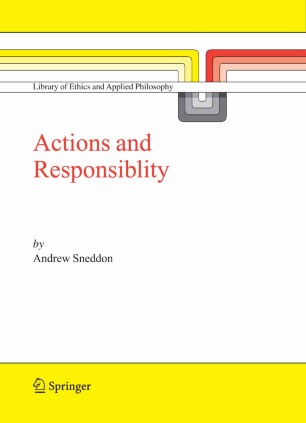 Part of the Library of Ethics and Applied Philosophy book series (LOET, volume 18)

What makes an event count as an action? Typical answers appeal to the way in which the event was produced: e.g., perhaps an arm movement is an action when caused by mental states (in particular ways), but not when caused in other ways. Andrew Sneddon argues that this type of answer, which he calls "productionism", is methodologically and substantially mistaken. In particular, productionist answers to this question tend to be either individualistic or foundationalist, or both, without explicit defence. Instead, Sneddon offers an externalist, anti-foundationalist account of what makes an event count as an action, which he calls neo-ascriptivism, after the work of H.L.A. Hart. Specifically, Sneddon argues that our practices of attributing moral responsibility to each other are at least partly constitutive of events as actions.

"Studies in the philosophy of action have predominantly aimed to provide theories of how the action is explained or produced. … Sneddon aims to undermine this approach by separating out two fundamental questions that he argues should be distinguished in formulating theories of action. … The clear and methodical way the book is set out ensures that a reader unfamiliar with this philosophical territory can easily engage with the text and its main arguments … . This is well-constructed, thoroughly argued addition … ." (Natalie F. Banner, Metapsychology Online Reviews, September, 2007)