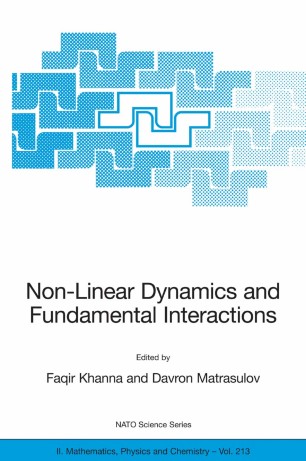 This volume contains the papers presented at the NATO Advanced Research Institute on "Non-Linear Dynamics and Fundamental Interactions" held in Tashkent, Uzbekistan, from Oct.10-16,2004. The main objective of the Workshop was to bring together people working in areas of Fundamental physics relating to Quantum Field Theory, Finite Temperature Field theory and their applications to problems in particle physics, phase transitions and overlap regions with the areas of Quantum Chaos. The other important area is related to aspects of Non-Linear Dynamics which has been considered with the topic of chaology. The applications of such techniques are to mesoscopic systems, nanostructures, quantum information, particle physics and cosmology. All this forms a very rich area to review critically and then find aspects that still need careful consideration with possible new developments to find appropriate solutions. There were 29 one-hour talks and a total of seven half-hour talks, mostly by the students. In addition two round table discussions were organised to bring the important topics that still need careful consideration. One was devoted to questions and unsolved problems in Chaos, in particular Quantum Chaos. The other round table discussion considered the outstanding problems in Fundamental Interactions. There were extensive discussions during the two hours devoted to each area. Applications and development of new and diverse techniques was the real focus of these discussions. The conference was ably organised by the local committee consisting of D.U.