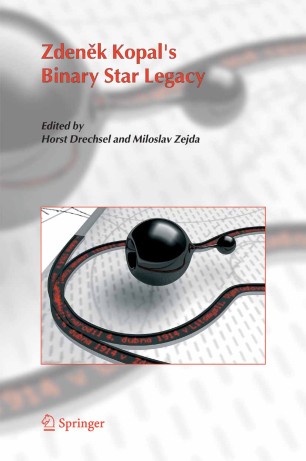 An international conference entitled "Zdenek Kopal's Binary Star Legacy" was held on the occasion of the late Professor Kopal's 90th birthday in his home town of Litomyšl/Czech Republic and dedicated to the memory of one of the leading astronomers of the 20th century.

Professor Kopal, who devoted 60 years of his scientific life to the exploration of close binary systems, initiated a breakthrough in this field with his description of binary components as non-spherical stars deformed by gravity, with surfaces following Roche equipotentials. Such knowledge triggered the development of new branches of astrophysics dealing with the structure and evolution of close binaries and the interaction effects displayed by exciting objects such as cataclysmic variables, symbiotic stars or X-ray binaries.

Contributions to this conference included praise of the achievements of a great astronomer and personal reminiscences brought forward by Kopal's former students and colleagues, and reflected the state of the art of the dynamically evolving field of binary research, which owes so much to the pioneering work of Zdenek Kopal.