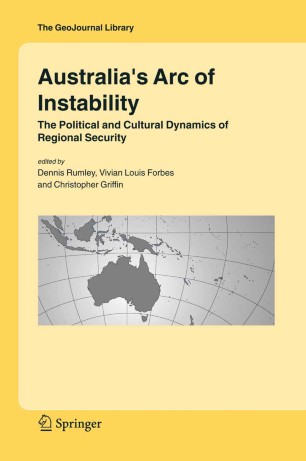 The Political and Cultural Dynamics of Regional Security

Part of the The GeoJournal Library book series (GEJL, volume 82)

The idea for this book emerged from a conversation between Vivian Forbes and Charles Eaton following two seminars held in the Department of Geography at the University of Western Australia given by Trevor So?eld and Christopher Grif?n more than ?ve years ago. One seminar involved papers from Charles Eaton and Christopher Grif?n on the recent Speight coup in Fiji; the other, given by Trevor So?eld, was on the Solomon Islands. The seminars were attended by, among others, Dennis Rumley, who on getting involved in the conversation, suggested the idea of a book and then followed through on its scope, structure, planning, and possible contributors. Looking back now, we owe a special debt of gratitude to Charles Eaton both for his enthusiasm and his ideas then, and for his continued support throughout the whole project. Since that time ?ve years ago, many people have boarded and have left the Arc. Indeed, the very project itself exhibited a degree of instability. At times, it even looked as though it might not stay a?oat. Thankfully, several early boarders remained ?rmly anchored. Other authors were co-opted later, some at relatively short notice, one or two of them under mild duress. We extend our heartfelt thanks to all of these contributors for remaining patient, enthusiastic, and keeping faith with the project. Naturally, a project like this, dealing with such a large and dynamic region, will always be out-of-date.