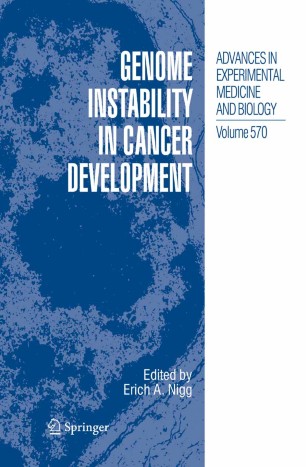 Part of the Advances in Experimental Medicine and Biology book series (AEMB, volume 570)

Research over the past decades has firmly established the genetic basis of cancer. In particular, studies on animal tumour viruses and chromosome rearrangements in human tumours have concurred to identify so-called ‘proto-oncogenes’ and ‘tumour suppressor genes’, whose deregulation promotes carcinogenesis. These important findings not only explain the occurrence of certain hereditary tumours, but they also set the stage for the development of anti-cancer drugs that specifically target activated oncogenes. However, in spite of tremendous progress towards the elucidation of key signalling pathways involved in carcinogenesis, most cancers continue to elude currently available therapies. This stands as a reminder that “cancer” is an extraordinarily complex disease: although some cancers of the haematopoietic system show only a limited number of characteristic chromosomal aberrations, most solid tumours display a myriad of genetic changes and considerable genetic heterogeneity. This is thought to reflect a trait commonly referred to as ‘genome instability’, so that no two cancers are ever likely to display the exact same genetic alterations. Numerical and structural chromosome aberrations were recognised as a hallmark of human tumours for more than a century. Yet, the causes and consequences of these aberrations still remain to be fully understood. In particular, the question of how genome instability impacts on the development of human cancers continues to evoke intense debate.