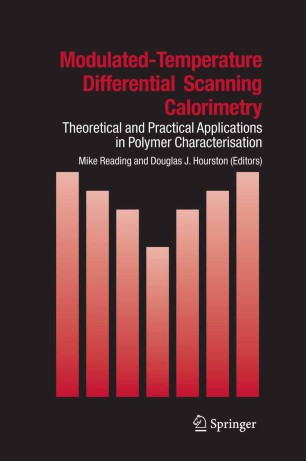 MTDSC provides a step-change increase in the power of calorimetry to characterize virtually all polymer systems including curing systems, blends and semicrystalline polymers. It enables hidden transitions to be revealed, miscibility to be accurately assessed, and phases and interfaces in complex blends to be quantified. It also enables crystallinity in complex systems to be measured and provides new insights into melting behaviour. All of this is achieved by a simple modification of conventional DSC.

In 1992 a new calorimetric technique was introduced that superimposed a small modulation on top of the conventional linear temperature program typically used in differential scanning calorimetry. This was combined with a method of data analysis that enabled the sample’s response to the linear component of the temperature program to be separated from its response to the periodic component. In this way, for the first time, a signal equivalent to that of conventional DSC was obtained simultaneously with a measure of the sample’s heat capacity from the modulation. The new information this provided sparked a revolution in scanning calorimetry by enabling new insights to be gained into almost all aspects of polymer characteristics.

This book provides both a basic and advanced treatment of the theory of the technique followed by a detailed exposition of its application to reacting systems, blends and semicrystalline polymers by the leaders in all of these fields. It is an essential text for anybody interested in calorimetry or polymer characterization, especially if they have found that conventional DSC cannot help them with their problems.

Michael Reading is a Professor of Pharmaceutical Characterisation Science at the University of East Anglia, Norwich, UK.

After post doctoral work in France (CNRS centre for calorimetry and thermodynamics, Marseilles), Mike Reading worked with ICI until 1997, when he left to join the IPTME in Loughborough University. In 2004 he moved to UEA to take up a chair in pharmaceutical characterisation science.

Research Posts: As a senior research scientist with ICI paints, Mike Reading was involved in a wide range of materials science and analysis projects (mainly involving polymers). One outcome from his work was Modulated Temperature Differential Scanning Calorimetry which has now become a common, commercially available technique. With co-workers Azzedine Hammiche and Hubert Pollock of Lancaster University, he invented a scanning probe microscopy based technique known as of micro thermal analysis. This has become a commercially available instrument and has won a number of awards for innovation.