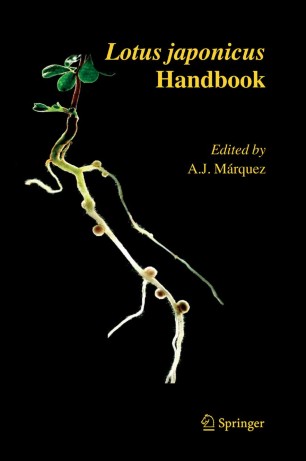 Legumes are very important plants playing a central role in biological research. They are a key component of sustainable agricultural systems because of symbiotic nitrogen fixation and other beneficial symbiosis with mycorrhizal fungi. Studies on most of the major leguminous crops are hampered by large genome sizes and other disadvantages which have hindered the isolation and characterisation of genes with important roles in legume biology and agriculture. For this reason Lotus japonicus was chosen as a model species for legume research some ten years ago. Since then, many groups around the world have adopted Lotus as a model and have developed numerous resources and protocols to facilitate basic and applied research on this species. This handbook represents the first effort to compile basic descriptions and methods for research in Lotus, including symbiotic processes, cell and molecular biology protocols, functional genomics, mutants, gene tagging and genetic analysis, transformation and reverse genetic analysis, primary and secondary metabolism, and an exhaustive update of the scientific literature available on this plant.