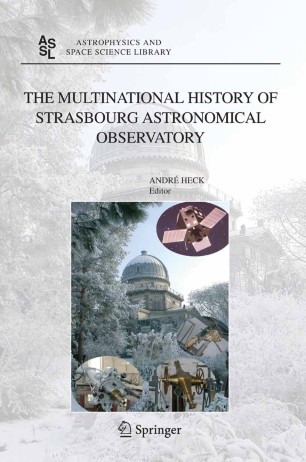 Strasbourg Astronomical Observatory is quite an interesting place for historians: several changes of nationality between France and Germany, high-profile scientists having been based there, big projects born or installed in its walls, and so on.
Most of the documents circulating on the history of the Observatory and on related matters have however been so far poorly referenced, if at all. This made necessary the compilation of a volume such as this one, offering fully-documented historical facts and references on the first decades of the Observatory history, authored by both French and German specialists.
The experts contributing to this book have done their best to write in a way understandable to readers not necessarily hyperspecialized in astronomy nor in the details of European history.
After an introductory chapter by the Editor, contributions by Wolfschmidt and by Duerbeck respectively deal extensively with the German periods and review people and instrumentation, while another paper by Duerbeck is more specifically devoted to World War II times. A subsequent chapter by Débarbat describes the development of instrumentation at Strasbourg Observatory during the French period between World Wars. Several contributions are devoted to specific astronomers such as Wislicenus (Duerbeck), Wirtz (Duerbeck & Seitter), and Muller (Bacchus).
Two chapters by Heck and Jung deal with the genesis and the first years of the Stellar Data Center (CDS) installed at Strasbourg Observatory, while Kovalevsky recalls that the Hipparcos space experiment was born there.
Seggewiss reminds the links of the Observatory with the Astronomische Gesellschaft, starting with the inauguration of the place. Bodenmuller & Heck discuss the visibility of the Observatory in the regional press around the beginning of the 20th century and two notes by Heck analyze respectively the Coronelli globe of the observatory and Danjon & Rougier’s first spectroscopic studies of the green flash from Strasbourg.
Several appendices conclude the book: lists of council members and of Observatory scientific personnel, as well as a compendium of the institutional publications until Year 2000.
This book will be most usefully read by historians, researchers, teachers, librarians as well as by students in astronomy and sociologists of science.

"Most of the documents circulating on the history of the Observatory and on related matters have however been so far very poorly referenced, if at all. This rendered necessary the compilation of a volume such as this one, offering fully-documented historical facts and references regarding the first decades of the Observatory's history, authored by both French and German specialists."
"This is the first and only work that gives such an extensive overview of the position of that important institute in teh development of European science." (ORION, No330, October 5/2005)

"In this well-documented book, André Heck and his fourteen co-authors are retracing a unique and exemplary chapter of astronomical history, that of the Strasbourg Observatory, in heart of Alsace." "This book is altogether a fine survey of a bipolar observatory, as described by André Heck in the first chapter of his book." - Jean-Claude Pecker, The Observatory, Vol.127, No.1198 June 2007