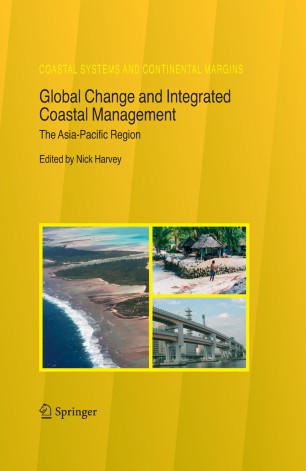 Most of the world’s population lives close to the coast and is highly dependent on coastal resources, which are being exploited at unsustainable rates. These resources are being subject to further pressures associated with population increase and the globalization of coastal resource demand. This is particularly so for the Asia-Pacific region which contains almost two thirds of the world’s population and most of the world’s coastal megacities. The region has globally important atmospheric and oceanic phenomena, which affect world climate such as the Asian Monsoon and the El-Niño Southern Oscillation phenomena. The Asia-Pacific region also has highly significant marine diversity but over the last few decades, coastal resources such as mangroves, coral reefs and fisheries have experienced large-scale depletion. The need to find appropriate management solutions to these and other coastal issues is made more complex by the need to take account of international scientific predictions for global climate change and sea-level rise which will further impact on these coasts. The idea for this book arose from a meeting of coastal scientists in Kobe, Japan in May 2003. The meeting was organized by the Asia-Pacific Network for Global Change Research (APN), an inter-governmental network, comprising 21 member countries, for the promotion of global change research and links between science and policy making in the region.