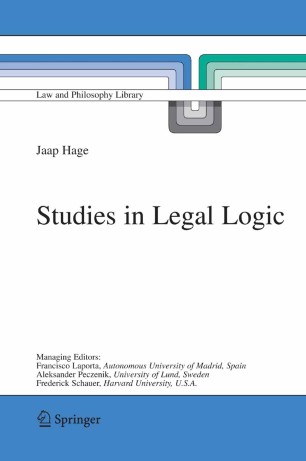 Studies in Legal Logic is a collection of nine interrelated papers about the logic, epistemology and ontology of law. All of the papers were written after the publication of the author’s Reasoning with Rules and supplement the issues addressed therein. Some of the papers are new; others have been revised substantially after the publication of their original versions. The emphasis is on analysis, not on logical technicalities.

Studies in Legal Logic contains chapters about the nature of norms, the role of coherence in the law, the nature of defeasibility, the role of dialectics in law and artificial intelligence, the statics and dynamics of the law, and the consistency of rules. Moreover, it contains a new, simplified and yet more powerful version of Reason-based Logic and extensive examples of how it can be used for the analysis of legal reasoning. The examples deal with legal theory construction, case-based reasoning, and judicial proof.

Studies in Legal Logic is primarily intended for researchers and students in the fields of analytical jurisprudence and artificial intelligence and law. It should also be of interest for readers interested in the philosophy of logic and epistemology.