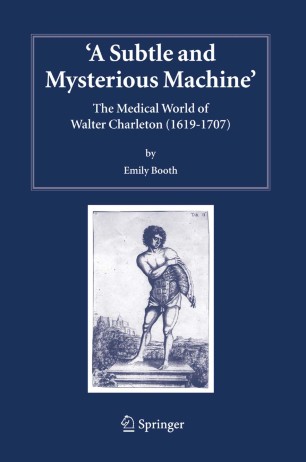 A Subtle and Mysterious Machine

Part of the Studies in History and Philosophy of Science book series (AUST, volume 18)

Walter Charleton (1619-1707) has been widely depicted as a natural philosopher whose intellectual career mirrored the intellectual ferment of the ‘scientific revolution’. Instead of viewing him as a barometer of intellectual change, I examine the previously unexplored question of his identity as a physician. Examining three of his vernacular medical texts, this volume considers Charleton’s thoughts on anatomy, physiology and the methods by which he sought to understand the invisible processes of the body.

Although involved in many empirical investigations within the Royal Society, he did not give epistemic primacy to experimental findings, nor did he deliberately identify himself with the empirical methods associated with the ‘new science’. Instead Charleton presented himself as a scholarly eclectic, following a classical model of the self. Physicians needed to endorse both ancient and modern authorities, in order to attract and retain patients. I argue that Charleton’s circumstances as a practising physician resulted in the construction of an identity at variance with that widely associated with natural philosophers. The insights he can offer us into the world of seventeenth century physicians are highly significant and utterly fascinating.