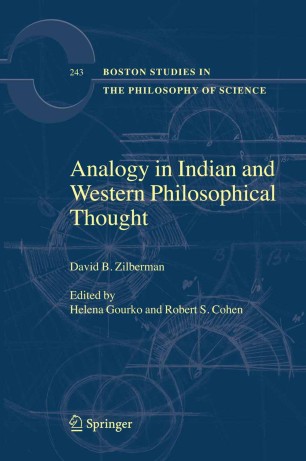 Part of the Boston Studies in the Philosophy of Science book series (BSPS, volume 243)

This book is unusual in many respects. It was written by a prolific author whose tragic untimely death did not allow to finish this and many other of his undertakings. It was assembled from numerous excerpts, notes, and fragments according to his initial plans. Zilberman’s legacy still awaits its true discovery and this book is a second installment to it after The Birth of Meaning in Hindu Thought (Kluwer, 1988). Zilberman’s treatment of analogy is unique in its approach, scope, and universality for Western philosophical thought. Constantly compared to eastern and especially classical Indian interpretations, analogy is presented by Zilberman as an important and in many ways primary method of philosophizing or philosophy-building. Due to its universality, this method can be also applied in linguistics, logic, social analysis, as well as historical and anthropological research. These applications are integral part of Zilberman’s book. A prophetic leap to largely uncharted territories, this book could be of considerable interest for experts and novices in the field of analogy alike.