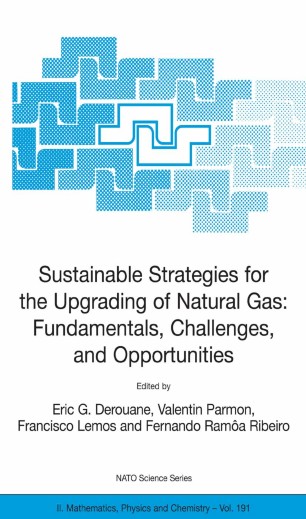 Sustainable Strategies for the Upgrading of Natural Gas: Fundamentals, Challenges, and Opportunities

Proceedings of the NATO Advanced Study Institute on Sustainable Strategies for the Upgrading of Natural Gas: Fundamentals, Challenges, and Opportunities Vilamoura, Portugal 6–18 July 2003

Energy and feedstock materials for the chemical industry are in increasing demand and, with constraints related to the availability and use of oil, the energy and chemical industry is undergoing considerable changes. In recent years, major restructuring has occurred in the oil, petrochemical, and chemical industry, with increasing attention devoted to the use of natural gas, methane in particular, as a chemical feedstock rather than just as a fuel. The conversion of remote natural gas into liquid fuels or other transportable chemicals is a challenge to industrial catalysis. Few processes exist so far with the major ones involving the conversion of natural gas to synthesis gas by steam reforming, CO2 reforming, or partial oxidation, followed by the syntheses of methanol, hydrocarbons (Fischer-Tropsch synthesis), or ammonia.

In this book, a comprehensive overview of the field of processing natural gas is given, through a series of chapters written by leading scientists and engineers in the field. New developments are discussed and current work relevant to the area is shown by a series of recent works by researchers working in this and related fields.