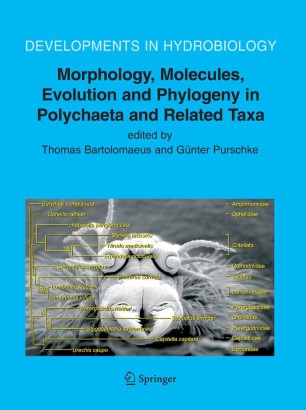 Morphology, Molecules, Evolution and Phylogeny in Polychaeta and Related Taxa

Part of the Developments in Hydrobiology book series (DIHY, volume 179)

Recently, evidence has been accumulated which shows that some of the groups formerly regarded as independent "phyla" such as Pogonophora (now recognized as Siboglinidae), Echiura, Myzostomida and perhaps Sipuncula, are most probably nothing else than greatly modified Annelida. The extreme morphological diversity found especially in Polychaeta displays the plasticity of a simple segmented organisation that basically is nothing else but a serial repetition of identical units. Thus, annelids are highly important to our understanding of fundamental questions about morphological and adaptive diversity, as well as clarifying evolutionary changes and phylogenetic relationships.

The book aims to summarize our knowledge on Polychaetes polychaetes and their allies and gives an overview of recent advances gained by studies that employed conventional and modern methods plus, increasingly and importantly, the use of molecular markers and computer-assisted kinship analyses. It also reflects the state of art in polychaete sciences and presents new questions and controversies. As such it will significantly influence the direction of research on Polychaeta and their related taxa.