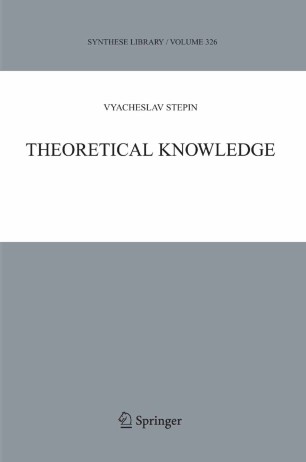 Vyacheslav Stepin (born 19.08.1934) is a distinguished Russian philosopher, PhD, Professor, active member of the Russian Academy of Sciences, Honoured Professor of Moscow State University and Honorary Doctor of the Karlsruhe University (Germany). He is the organizer and leader of large-scale joint research projects with foreign universities and research centers (USA, Germany, France, China) on problems of philosophy of sciences and technics, globalization and basic values of culture.

In the book Theoretical Knowledge by V. Stepin, an original conception of a structure and dynamics of scientific knowledge is proposed. A detailed analysis of the foundations of science performed by the author allowed him to develop new ideas and approaches, to demonstrate how sociocultural factors are incorporated in the process of yielding of new theories. He shows direct and inverse links between foundations of science and new theories and empirical facts evolved from those, how among many potentially possible histories of science a culture selects just those directions which become a real history of science.

The author analyses mechanisms of the generation of scientific theories and shows that those are changed in the process of historical development of science. He displays three historical types of scientific rationality (classical, non-classical and post-non-classical, which appears in modern science) and shows features of their coexistence and interplay. It is shown that along with the emerging of post-non-classical rationality science increases the sphere of its worldview applications. Science begins to correlate not only with the basic values of technogenic civilization but also with some values and patterns of traditional cultures.

The investigation is based on the extensive literature on the history of natural and social sciences. The reader will find in the book authentic historical reconstructions of the processes of the development of classical and quantum electrodynamics, relativity, and conceptions of evolution in biology.