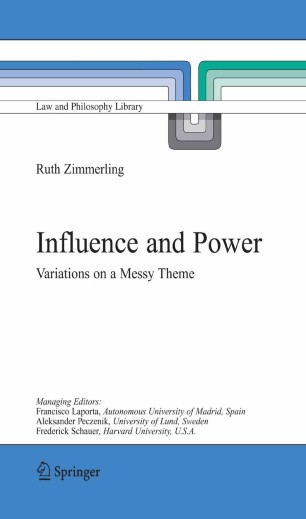 Variations on a Messy Theme

This book will be of interest to legal, political and other social theorists/philosophers. Unique in its topics as well as in its approach, the book takes substantial steps towards answering essential questions about political influence. It analyses the concepts of social, political and legal power with a view towards arriving at an adequate and theoretically relevant distinction between power and influence.

explores the conceptual relationship between freedom and power;

assesses the distinctions made in existing scholarship between power and influence;

presents the author’s own proposal for a definition of influence as opposed to power;

combines insights from political theory, legal philosophy and the general theory of norms;

is densely argued, yet accessible to all interested readers without any prerequisite of special prior knowledge;

"Exact but not exacting, this is a fine work of overview and analysis; it makes an excellent contribution to the literature on power and freedom."

"In this work, the author assumes the task of a ‘logical clean-up’ – an extremely valuable contribution to the promotion of scientific rigour and clarity in political scholarship." [This book] "gives the reader orientation in a conceptual jungle." [It is] "an excellent analysis of the relationships between normative and social power."

"A genuinely pioneering contribution insofar as the author – to my knowledge: for the first time ever – succeeds in giving a conceptually rather clear profile to a descriptive-analytic and normative understanding of the phenomenon of influence and in elucidating – again, by way of thorough and profound analysis – that this is much more than an academic glass-bead game, because our understanding of such essential normative foundations of political theory as freedom and equality is inextricably linked to the concepts of power and influence, and because this is the only way how we can come to see the fundamental obstacles to a coherent interpretation and institutional realization of the idea of the democratic Rechtsstaat."