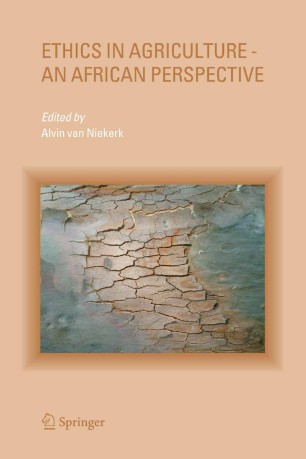 Ethics in Agriculture — An African Perspective

Agriculture is the lifeblood of the majority of people in Africa. It is not just a provider of food, it is a way of life for rural people. Whilst subsistence farming is the most practiced form of agriculture, there are many parts of Africa where agriculture is highly developed and progressive. In many instances it is the very diversity of agricultural practices that raises complex problems and issues. These issues often manifest themselves in ways that create ethical dilemmas for farmers, policy-makers, academics, politicians and the general lay-person. In particular, the role of biotechnology in African agriculture has become a contentious issue. Some people hold the view that biotechnology will solve the food shortages experienced in many parts of Africa, however, there is an opposing viewpoint that Africa may become a dumping ground for technology that has not been acceptable in other parts of the world. The ethical issues in agriculture in Africa do not focus only on biotechnology. The role of nutrition in the persistence of HIV/AIDS is highly debated and sometimes controversial. Land-related issues also generate heated debates in communities and amongst policy-makers. The single core that runs through all of these and many other related issues is, what are ethically acceptable solutions to these problems? This book attempts, in simple, unambiguous terms, to discuss the most important issues in African agriculture that have an ethical thread.