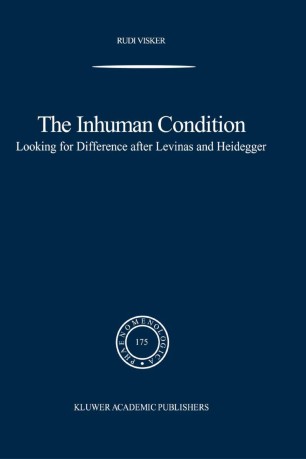 Looking for Difference after Levinas and Heidegger

At the origin of this volume, a simple question: what to make of that surprisingly monotonous series of statements produced by our societies and our philosophers that all converge in one theme - the importance of difference?

To clarify the meaning of the difference at stake here, we have tried to rephrase it in terms of the two major and mutually competing paradigms provided by the history of phenomenology only to find both of them equally unable to accommodate this difference without violence. Neither the ethical nor the ontological approach can account for a subject that insists on playing a part of its own rather than following the script provided for it by either Being or the Good. What appears to be, from a Heideggerian or Levinasian perspective, an unwillingness to open up to what offers to deliver us from the condition of subjectivity is analysed in these pages as a structure in its own right. Far from being the wilful, indifferent and irresponsive being its critics have portrayed it to be, the so-called 'postmodern' subject is essentially finite, not even able to assume the transcendence to which it owes its singularity. This inability is not a lack - it points instead to a certain unthought shared by both Heidegger and Levinas which sets the terms for a discussion no longer our own. Instead of blaming Heidegger for underdeveloping 'being-with', we should rather stress that his account of mineness may be, in the light of contemporary philosophy, what stands most in need of revision. And, instead of hailing Levinas as the critic whose stress on the alterity of the Other corrects Heidegger's existential solipsism, the problems into which Levinas runs in defining that alterity call for a different diagnosis and a corresponding change in the course that phenomenology has taken since. Instead of preoccupying itself with the invisible, we should focus on the structures of visibility that protect us from its terror.

The result? An account of difference that is neither ontological nor ethical, but 'mè-ontological', and that can help us understand some of the problems our societies have come to face (racism, sexism, multiculturalism, pluralism). And, in the wake of this, an unexpected defence of what is at stake in postmodernism and in the question it has refused to take lightly: who are we? Finally, an homage to Arendt and Lyotard who, if read through each other's lenses, give an exact articulation to the question with which our age struggles: how to think the 'human condition' once one realizes that there is an 'inhuman' side to it which, instead of being its mere negation, turns out to be that without which it would come to lose its humanity?