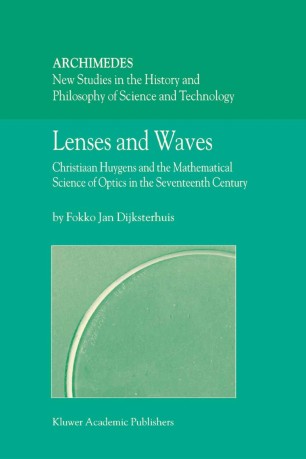 In 1690, Christiaan Huygens (1629-1695) published Traité de la Lumière, containing his renowned wave theory of light. It is considered a landmark in seventeenth-century science, for the way Huygens mathematized the corpuscular nature of light and his probabilistic conception of natural knowledge. This book discusses the development of Huygens’ wave theory, reconstructing the winding road that eventually led to Traité de la Lumière. For the first time, the full range of manuscript sources is taken into account. In addition, the development of Huygens’ thinking on the nature of light is put in the context of his optics as a whole, which was dominated by his lifelong pursuit of theoretical and practical dioptrics. In so doing, this book offers the first account of the development of Huygens’ mathematical analysis of lenses and telescopes and its significance for the origin of the wave theory of light. As Huygens applied his mathematical proficiency to practical issues pertaining to telescopes – including trying to design a perfect telescope by means of mathematical theory – his dioptrics is significant for our understanding of seventeenth-century relations between theory and practice. With this full account of Huygens’ optics, this book sheds new light on the history of seventeenth-century optics and the rise of the new mathematical sciences, as well as Huygens’ oeuvre as a whole. Students of the history of optics, of early mathematical physics, and the Scientific Revolution, will find this book enlightening.

"This book evolved out of a dissertation presented to the University of Twente in 1999. … there is a list of over 400 references in a variety of languages which the author consulted in the preparation of the book. The style of the book is easy … . This is a scholarly work which sheds light on the development of optics in the crucial period of the latter half of the seventeenth century. It can be thoroughly recommended." (Ll. G. Chambers, Mathematical Reviews, Issue 2006 e)