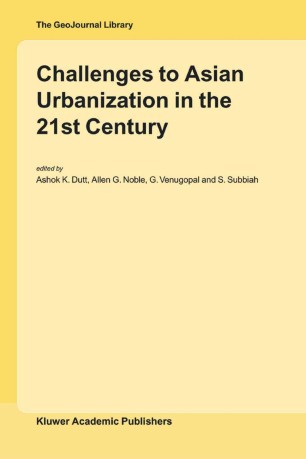 Challenges to Asian Urbanization in the 21st Century

Part of the The GeoJournal Library book series (GEJL, volume 75)

st th The 21 century is the century of Asia in the same way the 20 century was of America. In terms of urbanization challenges Asia in the current century is faced with an enormous surge of urban population and the associated problems of rural –urban migration, overcrowding, proliferation of slums, housing shortage, growing unempl- ment and underemployment and choice between capital intensive productivity vs. labor intensive employment generation, suffocating pollution caused by both industries and motor vehicle fumes, crumbling urban facilities and education / health care systems and above all mind boggling poverty. While facing these challenges many bright urbani- tion aspects may also be noted –efficient mass transport systems of Japan, banning of leaded fuels for motor vehicles in Indian mega cities, formation and operation of metro –planning organizations, linking rural/urban development and a general consciousness of urban problems, recognization and efforts to resolve them. This book pioneers the analysis and research effort on urbanization in Asia in the st 21 century in light of new and continued challenges. It is a part of a continuum that emanates from the selected papers at the Sixth Asian Urbanization Conference (AUC) held in Chennai (Madras), India in January 2000. AUC is organized almost every third year. The Asian Urbanization Research Organization (AURA) headquartered at The University of Akron’s Department of Geography and Planning plans such conferences.