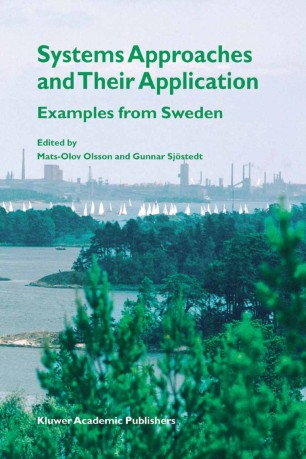 Systems Approaches and Their Application

In the development of an international agenda for applied systems analysis Swedish experience, developed over a considerable number of years, embraces a wide range of application domains. One international focal point for the Swedish interest in systems analysis has been – the International Institute for Applied Systems Analysis, with its headquarters in Laxenburg outside Vienna. The Swedish Research Council for Env- onment, Agricultural Sciences and Spatial Planning (Formas) is currently responsible for the Swedish contacts with . When Formas was established in it inherited the Swedish national committee for the promotion of contacts and systems a- lysis that was originally set up by the Swedish Council for Planning and Coordination of Research (frn ), which was abolished in conjunction with a major reform of the Swedish research ?nancing system. Within the framework of the Committee a special project was launched in line with a proposal by Gunnar Sjöstedt dealing with the Swedish experience in s- tems analysis and thus, indirectly, with themes related to most of ’s activities. The project co-ordination and editorial tasks were given to Mats-Olov Olsson and Gunnar Sjöstedt under the direct surveillance of the Committee. Many of the Committee m- bers and their co-workers as well as several other Swedish scholars have contributed to this book. Several years of work have gone into bringing together Swedish experience in this ?eld, and we hope that the book will be interesting for an international as well as for a Swedish audience.