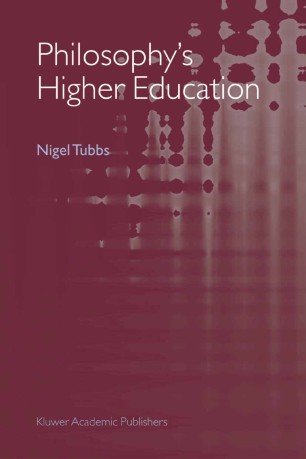 At about the age of 13 I began to realise that my formal education was separating itself off from my philosophical education. Of course, at the time I did not know it in this way. I experienced it as a split between what I was being taught and my experience of what I was being taught. It was, I now know, the philosophical experience of formal schooling. It was not until beginning the study of sociology at 16 that I came across the idea of dualisms—pairs of opposites that always appeared together but were never reconciled. In sociology it was the dualism of the individual and society. The question most asked in our classes was always regarding which aspect of the dualism dominated the other. The answer we always leaned towards was that both were mutually affected by the other. The answer seemed to lie somewhere in the middle. It was only at university, first as an undergraduate and then as a postgraduate, that I came across the idea of the dialectic. Slowly I began to recognise that the dualisms which plagued social theory—I and we, self and other, good and evil, modernity and post-modernity, autonomy and heteronomy, freedom and nature, truth and relativism, and so many more—were not only dialectical in being thought about, but also that the thought of them being dialectical had an even stranger quality. It was the same experience as being at school.