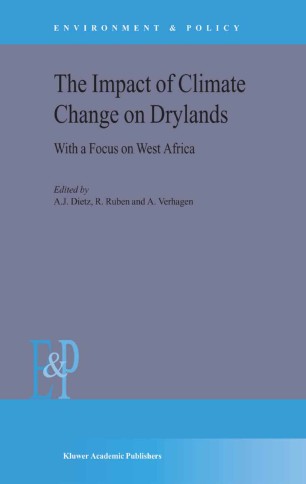 The Impact of Climate Change on Drylands

With a Focus on West Africa

Sahelian West Africa has recovered from the disastrous droughts of the 1970s and 1980s. People have learned to adapt to risk and uncertainty in fragile dryland environments. They, as well as global change scientists, are worried about the impact of climate change on these West African drylands. What do the experiences of the last thirty years say about the preparedness for higher temperatures, lower rainfall, and even more variability? Detailed studies on Dryland West Africa as a whole, and on Burkina Faso, Mali and Northern Ghana in particular show an advanced coping behaviour and increased adaptation, but also major differences in vulnerability and coping potential. Climate change preparedness programmes have only just started and require more robust support, and more specific social targeting, for a population which is rapidly growing, even more rapidly urbanising, and further integrating in a globalised economy.

This book is the first of its kind with a comprehensive analysis of climate change experiences in West African drylands, with attention for pathways of change and the diversity of adaptation options available. This book is of interest to scientists studying global and climate change, especially dealing with issues of adaptation. Social scientists, economists, geographers and policy makers concerned with West Africa should also read this book.