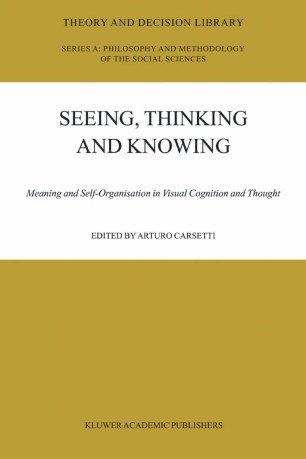 Meaning and Self-Organisation in Visual Cognition and Thought

Part of the Theory and Decision Library A: book series (TDLA, volume 38)

According to Putnam to talk of “facts” without specifying the language to be used is to talk of nothing; “object” itself has many uses and as we creatively invent new uses of words “we find that we can speak of ‘objects’that were not ‘values of any variable’in 1 any language we previously spoke” . The notion of object becomes, then, like the notion of reference, a sort of open land, an unknown territory. The exploration of this land - pears to be constrained by use and invention. But, we may wonder, is it possible to guide invention and control use? In what way, in particular, is it possible, at the level of na- ral language, to link together program expressions and natural evolution? To give an answer to these onerous questions we should immediately point out that cognition (as well as natural language) has to be considered first of all as a peculiar fu- tion of active biosystems and that it results from complex interactions between the - ganism and its surroundings. “In the moment an organism perceives an object of wh- ever kind, it immediately begins to ‘interpret’this object in order to react properly to it . . . It is not necessary for the monkey to perceive the tree in itself. . . What counts is sur- 2 vival” .