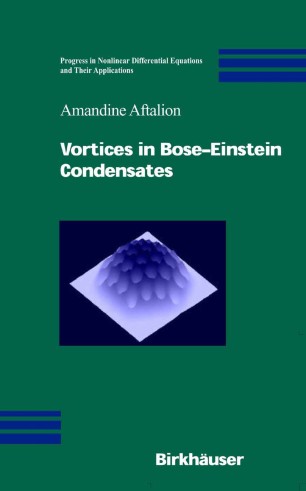 Part of the Progress in Nonlinear Differential Equations and Their Applications book series (PNLDE, volume 67)

Since the first experimental achievement of Bose–Einstein condensates (BEC) in 1995 and the award of the Nobel Prize for Physics in 2001, the properties of these gaseous quantum fluids have been the focus of international interest in physics. This monograph is dedicated to the mathematical modelling of some specific experiments which display vortices and to a rigorous analysis of features emerging experimentally.

In contrast to a classical fluid, a quantum fluid such as a Bose–Einstein condensate can rotate only through the nucleation of quantized vortices beyond some critical velocity. There are two interesting regimes: one close to the critical velocity, where there is only one vortex that has a very special shape; and another one at high rotation values, for which a dense lattice is observed.

One of the key features related to superfluidity is the existence of these vortices. We address this issue mathematically and derive information on their shape, number, and location. In the dilute limit of these experiments, the condensate is well described by a mean field theory and a macroscopic wave function solving the so-called Gross–Pitaevskii equation. The mathematical tools employed are energy estimates, Gamma convergence, and homogenization techniques. We prove existence of solutions that have properties consistent with the experimental observations. Open problems related to recent experiments are presented.

The work can serve as a reference for mathematical researchers and theoretical physicists interested in superfluidity and quantum fluids, and can also complement a graduate seminar in elliptic PDEs or modelling of physical experiments.

The book is a compilation of several recent papers in the rigorous analysis of the Gross-Pitaevski\u\i functional in various physically relevant regimes, as well as a helpful discussion of the physical literature and numerical studies of vortices in BEC. Most of the analysis is done for the Thomas-Fermi limit in two-dimensional cases – MathSciNet

"This monograph by Amandine Aftalion presents rigorous mathematical models of some experiments on BECs which display vortices." –Zetralblatt Math