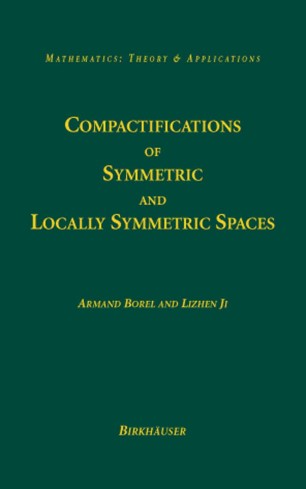 Noncompact symmetric and locally symmetric spaces naturally appear in many mathematical theories, including analysis (representation theory, nonabelian harmonic analysis), number theory (automorphic forms), algebraic geometry (modulae) and algebraic topology (cohomology of discrete groups). In most applications it is necessary to form an appropriate compactification of the space. The literature dealing with such compactifications is vast. The main purpose of this book is to introduce uniform constructions of most of the known compactifications with emphasis on their geometric and topological structures.

Familiarity with the theory of semisimple Lie groups is assumed, as is familiarity with algebraic groups defined over the rational numbers in later parts of the book, although most of the pertinent material is recalled as presented. Otherwise, the book is a self-contained reference aimed at graduate students and research mathematicians interested in the applications of Lie theory and representation theory to diverse fields of mathematics.