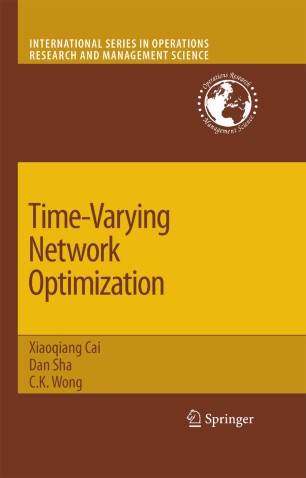 Network flow optimization analyzes optimization problems on networks; hence, network optimization is reflected in many application fields including transportation, telecommunication, computer networking, financial planning, logistics and supply chain management, energy systems, etc. However, to date, most network optimization problems that have been studied are static network optimization problems. But "real world networks" are time-varying in essence, and therefore any flow within a network must take a certain amount of time to traverse an arc. Moreover, the parameters of "real world networks" may change over time. Problems such as how to plan and control the transmission of flow becomes very important, because waiting at a node, or traveling along a particular arc with different speed, may allow one to catch the best timing along the path; thus, achieving the objective and changing the decision making process. It should be noted that there are a host of decision making problems in practice that should be formulated as optimization models on time-varying networks.

The express purpose of TIME-VARYING NETWORK OPTIMIZATION is to describe, in a unified and self-contained manner, a series of models, propositions, and algorithms developed in recent years on time-varying networks. References and discussions on relevant problems and studies that have appeared in the literature are integrated in the book. The book consists of eight chapters, in which the following problems are formulated and examined: (1) the shortest path problem, (2) minimum-spanning tree problem, (3) maximum flow problem, (4) minimum cost flow problem, (5) maximum capacity path problem, (6) quickest path problem, (7) multi-criteria problem, and (8) the generalized flow problem. The time-varying traveling salesman problem and the Chinese postman problem are presented in a chapter together with the time-varying generalized problem. While these topics will be described all within the framework of time-varying networks, our plan is to make each chapter relatively self-contained so that each can read separately.

The book will be useful for researchers, practitioners, graduate students and senior undergraduates, as a unified reference and textbook on time-varying network optimization. While the book describes the structure of the algorithms, the authors also have developed the software that implements the algorithms. This software can be made available for academic study purposes upon request.