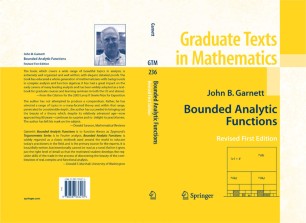 The book, which covers a wide range of beautiful topics in analysis, is extremely well organized and well written, with elegant, detailed proofs. The book has educated a whole generation of mathematicians with backgrounds in complex analysis and function algebras. It has had a great impact on the early careers of many leading analysts and has been widely adopted as a textbook for graduate courses and learning seminars in both the US and abroad.

- From the Citation for the 2003 Leroy P. Steele Prize for Exposition

The author has not attempted to produce a compendium. Rather, he has selected a range of topics in a many-faceted theory and, within that range, penetrated to considerable depth...the author has succeeded in bringing out the beauty of a theory which, despite its relatively advanced age---now approaching 80 years---continues to surprise and to delight its practitioners. The author has left his mark on the subject.

Garnett's Bounded Analytic Functions is to function theory as Zygmund's Trigonometric Series is to Fourier analysis. Bounded Analytic Functions is widely regarded as a classic textbook used around the world to educate today's practioners in the field, and is the primary source for the experts. It is beautifully written, but intentionally cannot be read as a novel. Rather it gives just the right level of detail so that the motivated student develops the requisite skills of the trade in the process of discovering the beauty of the combination of real, complex and functional analysis.

"After having been out of print for many years, the long-awaited revised first edition of this wonderful book has finally reappeared, this time with Springer Verlag. In 2003, Garnett was awarded the AMS Steel prize for this book; one of the highest distinctions for mathematical exposition. … To sum up, Garnett’s book is as useful now as it was in 1981 and is highly recommended to everyone interested in function theory." (Raymond Mortini, Zentralblatt MATH, Vol. 1106 (8), 2007)

"The book contains information about Hardy spaces, conjugate functions, bounded mean oscillation and duality, interpolating sequences, corona construction, Douglas algebras and many other topics. … The book … is a gold mine for researchers and experts." (EMS Newsletter, September, 2008)