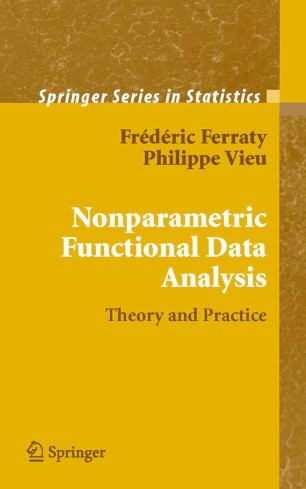 Modern apparatuses allow us to collect samples of functional data, mainly curves but also images. On the other hand, nonparametric statistics produces useful tools for standard data exploration. This book links these two fields of modern statistics by explaining how functional data can be studied through parameter-free statistical ideas. This book starts from theoretical foundations including functional nonparametric modeling, description of the mathematical framework, construction of the statistical methods, and statements of their asymptotic behaviors. It proceeds to computational issues including R and S-PLUS routines. Several functional datasets in chemometrics, econometrics, and pattern recognition are used to emphasize the wide scope of nonparametric functional data analysis in applied sciences. The companion Web site includes R and S-PLUS routines, command lines for reproducing examples presented in the book, and the functional datasets.

Rather than set application against theory, this book is really an interface of these two features of statistics. A special effort has been made in writing this book to accommodate several levels of reading. The computational aspects are oriented toward practitioners whereas open problems emerging from this new field of statistics will attract Ph.D. students and academic researchers. Finally, this book is also accessible to graduate students starting in the area of functional statistics.

Frédéric Ferraty and Philippe Vieu are both researchers in statistics at Toulouse University (France). They are co-founders and co-organizers of the working group STAPH which acquired an international reputation for functional and operatorial statistics. They are authors of many international publications in nonparametric inference as well as functional data analysis. Their scientific works are based on extensive collaborations both with academic statisticians and with scientists from other areas. They have been invited to organize special sessions on functional data in recent international conferences and to teach Ph.D. courses in various countries.