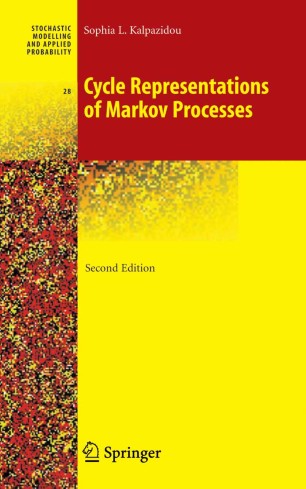 "The first edition of this book [S. Kalpazidou, Cycle representations of Markov processes, Springer, New York, 1995; MR1336140 (96g:60002)] has been reviewed by this reviewer. This second edition amplifies Part I of the first edition, which consisted of 7 chapters, by adding four chapters: Chapter 8. Cycloid Markov processes; Chapter 9. Markov processes on Banach spaces on cycles; Chapter 10. The cycle measures; Chapter 11. Wide-ranging interpretations of the cycle representations of Markov processes. Also, there is a new Section 3.6 devoted to induced circuit chains in Part I, and a new Section 1.4 on Derriennic recurrence criteria in terms of weighted circuits in Part II. Besides, improvements have been introduced at different places (without completely eliminating linguistic slips).

The reviewer is glad that this second edition confirms his expectations concerning the applicability potential of the cycle representation topic. The book under review is indeed mainly motivated by the many applications of cycle representations which occurred in different fields, after the publication of the first edition. "   (M. Iosifescu, Mathematical Reviews)

"The main purpose of the second edition … is to give systematic and unified exposition of stochastic processes of the Markovian type, homogeneous and with either discrete or continuous parameter, which, under an additional assumption concerning the existence of invariant measures, can be defined by directed cycles or circuits. … The book will be useful for experts in representation theory of Markov processes." (Anatoliy Swishchuk, Zentralblatt MATH, Vol. 1113 (15), 2007)