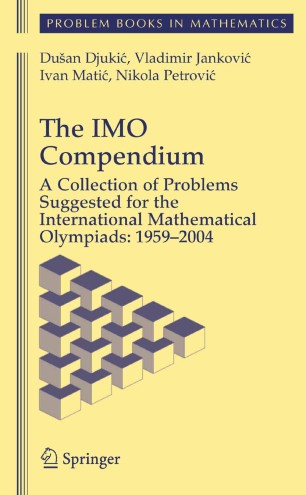 A Collection of Problems Suggested for the International Mathematical Olympiads: 1959–2004

The International Mathematical Olympiad (IMO) has within its almost 50-year-old history become the most popular and prestigious competition for high-school students interested in mathematics. Only six students from each participating country are given the honor of participating in this competition every year. The IMO represents not only a great opportunity to tackle interesting and challenging mathematics problems, it also offers a way for high school students to measure up with students from the rest of the world.

The IMO has sparked off a burst of creativity among enthusiasts in creating new and interesting mathematics problems. In an extremely stiff competition, only six problems are chosen each year to appear on the IMO. The total number of problems proposed for the IMOs up to this point is staggering and, as a whole, this collection of problems represents a valuable resource for all high school students preparing for the IMO.

Until now it has been almost impossible to obtain a complete collection of the problems proposed at the IMO in book form. "The IMO Compendium" is the result of a two year long collaboration between four former IMO participants from Yugoslavia, now Serbia and Montenegro, to rescue these problems from old and scattered manuscripts, and produce the ultimate source of IMO practice problems. This book attempts to gather all the problems and solutions appearing on the IMO, as well as the so-called "short-lists", a total of 864 problems. In addition, the book contains 1036 problems from various "long-lists" over the years, for a grand total of 1900 problems.

In short, "The IMO Compendium" is the ultimate collection of challenging high-school-level mathematics problems. It will be an invaluable resource, not only for high-school students preparing for mathematics competitions, but for anyone who loves and appreciates math.

* Vladimir Jankovic, Ph.D. in Mathematics, Associate Professor at the

* Nikola Petrovic, IMO: 2 silver, bronze, B.Sc. in Mathematics and in

"The International Mathematical Olympiad, or IMO is the premier international competition for talented high school mathematics students. … This book collects statements and solutions of all of the problems ever set in the IMO, together with many problems proposed for the contest. … serves as a vast repository of problems at the Olympiad level, useful both to students … and to faculty looking for hard elementary problems. No library will want to be without a copy, nor will anyone involved in mathematics competitions … ." (Fernando Q. Gouvêa, MathDL, March,2006)