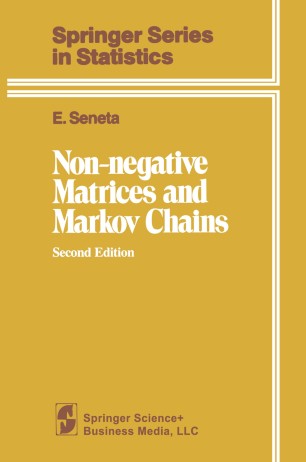 1981, for which there has been continuing demand on account of its accessible technical level. Its appearance also helped generate considerable subsequent work on inhomogeneous products of matrices. This printing adds an additional bibliography on coefficients of ergodicity and a list of corrigenda.

Eugene Seneta received his Ph.D. in 1968 from the Australian National University. He left Canberra in 1979 to become Professor and Head of the Department of Mathematical Statistics at the University of Sydney. He has been a regular visitor to the United States, most frequently to the University of Virginia. Now Emeritus Professor at the University of Sydney, he has recently developed a renewed interest in financial mathematics. He was elected Fellow of the Australian Academy of Science in 1985 and awarded the Pitman Medal of the Statistical Society of Australia for his distinguished research contributions.

The first edition of this book, entitled Non-Negative Matrices, appeared in 1973, and was followed in 1976 by his Regularly Varying Functions in the Springer Lecture Notes in Mathematics, later translated into Russian. Both books were pioneering in their fields. In 1977, Eugene Seneta coauthored (with C. C. Heyde ) I.J. Bienaymé : Statistical Theory Anticipated, which is effectively a history of probability and statistics in the 19th century, and in 2001 co-edited with the same colleague Statisticians of the Centuries, both published by Springer. Having served on the editorial board of the Encyclopedia of Statistical Science, he is currently Joint Editor of the International Statistical Review.