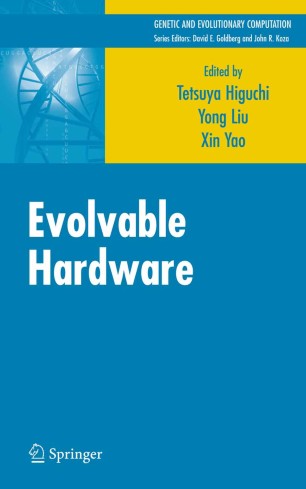 Part of the Genetic and Evolutionary Computation book series (GEVO)

Evolvable hardware (EHW) refers to hardware whose architecture/structure and functions change dynamically and autonomously in order to improve its performance in carrying out tasks. The emergence of this field has been profoundly influenced by the progress in reconfigurable hardware and evolutionary computation. Traditional hardware can be inflexible—the structure and its functions are often impossible to change once it is created. However, most real world problems are not fixed—they change with time. In order to deal with these problems efficiently and effectively, different hardware structures are necessary. EHW provides an ideal approach to make hardware "soft" by adapting the structure to a problem dynamically.

The contributions in this book provide the basics of reconfigurable devices so that readers will be fully prepared to understand what EHW is, why it is necessary and how it is designed. The book also discusses the leading research in digital, analog and mechanical EHW. Selections from leading international researchers offer examples of cutting-edge research and applications, placing particular emphasis on their practical usefulness.

Professionals and students in the field of evolutionary computation will find this a valuable comprehensive resource which provides both the fundamentals and the latest advances in evolvable hardware.

"‘Evolvable Hardware’ … is the newest title in David E. Goldberg and John R. Koza’s ‘Genetic and Evolutionary Computation’ book series. It is directed at advanced-level students interested in evolvable hardware (EHW). … it includes a collection of 11 examples of cutting-edge research and applications that will attract EHW specialists. ... It is a good book for EHW researchers, since it brings together articles specially selected by editors, who are very experienced in the field, to trace the state of the art in EHW applications." (Eduardo do Valle Simoes, Genetic Programming and Evolvable Machines, Vol. 8, 2007)

"The general field of genetic algorithms, evolutionary hardware, and genetic programming has grown steadily over the last 15 years. … This book can be considered unique in that it concentrates heavily on the development of hardware to support these efforts … . This has added appeal, in that it is highly applicable and generalizable to many practical areas. The editors and authors of the chapters did a fine job in communicating these advanced technologies and applications to a wide audience." (Minette Carl and Michael Goldberg, ACM Computing Reviews, Vol. 49 (3), March, 2008)