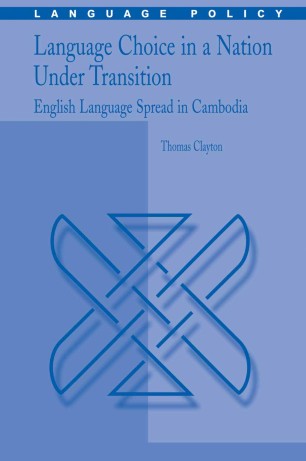 Language Choice in a Nation Under Transition

This book examines language choice in contemporary Cambodia, and uses the case study to explore and evaluate competing explanations for the spread of English globally.

Following the introduction, the multiple contexts in which Cambodians make individual and institutional language policy choices are considered. Chapters 2 and 3 examine the economic and political contexts for language choice, as Cambodia has transitioned from a planned economy and communism to a market economy and democracy. Chapters 4, 5, and 6 examine the assistance context for language choice; the bilateral, multilateral, and nongovernmental development agencies that have recently begun to work in Cambodia demand certain language skills of Cambodian employees and government counterparts, and support the learning of these languages in both nonformal and formal education.

Individual and institutional languages choices Cambodians are making in economic, political, assistance, and educational contexts are described. Some Cambodians have chosen to learn French, making language policy decisions supportive of French language learning, in anticipation of education offered in French at universities locally and abroad. More Cambodians are studying and learning Chinese to procure jobs with firms owned or managed by Chinese speakers. A great many have chosen to learn English and to support English language learning in education. These decisions respond to the multiple demands and opportunities for employment with economic and assistance enterprises associated with virtually every nation or group of nations, for regional and international political communication, and for education in the global infrastructure of English-language universities.

Having thus contextualized and described Cambodians’ contemporary language choices, the case study is applied to a theoretical debate in the field of language policy studies. The specifics of the Cambodian case fully confirm neither the "language choice" nor the "linguistic imperialism" explanation for the global spread of English. Rather, in Cambodia English is spreading as a result of both choice and promotion, it integrates with (though is not integral to) the contemporary global restructuring of the world, and has introduced results that, though aggregating toward amelioration, run the gamut from beneficial to exploitative for groups of Cambodians located variously along geographical, socioeconomic, ethnic, and other spectra.

Thomas Clayton is Associate Professor of English and Linguistics at the University of Kentucky, U.S.A., where he teaches classes in applied linguistics and directs the Master of Arts in English with a Concentration in Teaching English as a Second Language Program. Professor Clayton has published more than two dozen articles on language and educational policy issues, often in the Cambodian context, in books and journals. In 1991, Clayton established the first U.S. university educational program in postwar Cambodia, the English Language Teaching Center for the State University of New York at Buffalo at the Cambodia Development Resource Institute. In 2000, he taught at the Faculty of Law and Economics in Phnom Penh as the first-ever Fulbright scholar to Cambodia.