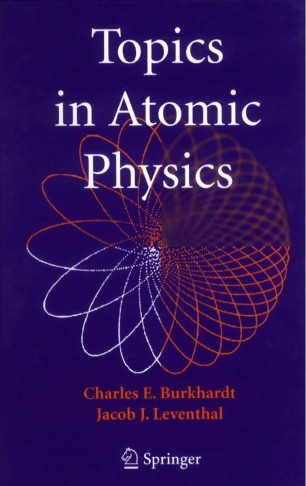 The study of atomic physics propelled us into the quantum age in the early twentieth century and carried us into the twenty-first century with a wealth of new and, in some cases, unexplained phenomena. Topics in Atomic Physics provides a foundation for students to begin research in modern atomic physics. It can also serve as a reference because it contains material that is not easily located in other sources.

A distinguishing feature is the thorough exposition of the quantum mechanical hydrogen atom using both the traditional formulation and an alternative treatment not usually found in textbooks. The alternative treatment exploits the preeminent nature of the pure Coulomb potential and places the Lenz vector operator on an equal footing with other operators corresponding to classically conserved quantities. A number of difficult to find proofs and derivations are included as is development of operator formalism that permits facile solution of the Stark effect in hydrogen.

Discussion of the classical hydrogen atom is also presented. Using the correspondence principle this provides a transition from classical to quantum concepts. It is also adapted to describing certain characteristics of multi-electron atoms.

The book is intended for graduate students who have had introductory quantum mechanics, but undergraduates who have had such a course can also benefit from it. There are more than eighty problems at the ends of chapters with all answers given. A detailed solutions manual, in some cases giving more than one solution, is available to instructors.