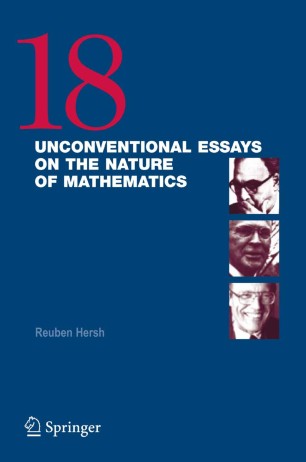 18 Unconventional Essays on the Nature of Mathematics

Advance praise for 18 Unconventional Essays on the Nature of Mathematics:

"I was pleasantly surprised to find that this book does not treat mathematics as dessicated formal logic but as a living organism, immediately recognizable to any working mathematician."

"A wonderful collection of essays on the philosophy of mathematics, some by mathematicians, others by philosophers, and all having significant things to say. Most readers will be informed, some will be infuriated, but all will be stimulated."

This startling new collection of essays edited by Reuben Hersh contains frank facts and opinions from leading mathematicians, philosophers, sociologists, cognitive scientists, and even an anthropologist. Each essay provides a challenging and thought-provoking look at recent advances in the philosophy of mathematics, demonstrating the possibilities of thinking fresh, sticking close to actual practice, and fearlessly letting go of standard shibboleths.

The following essays are included:

* William Thurston: On Proof and Progress in Mathematics

* Brian Rotman: Towards a Semiotics of Mathematics

* Donald Mackenzie: Computers and the Sociology of Mathematical Proof

* Terry Stanway: From G.H.H. and Littlewood to XML and Maple: Changing Needs and Expectations in Mathematical Knowledge Management

* Jody Azzouni: How and Why Mathematics is a Social Practice

* Gian-Carlo Rota: The Pernicious Influence of Mathematics Upon Philosophy

* Jack Schwartz: The Pernicious Influence of Mathematics on Science

* Alfonso Avila del Palacio: What is Philosophy of Mathematics Looking For?

* Andrew Pickering: Concepts and the Mangle of Practice: Constructing Quaternions

* Eduard Glas: Mathematics as Objective Knowledge and as Human Practice

* Leslie White: The Locus of Mathematical Reality: An Anthropological Footnote