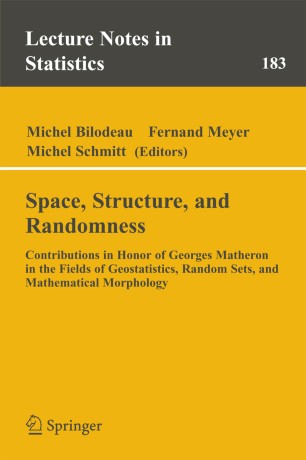 Contributions in Honor of Georges Matheron in the Field of Geostatistics, Random Sets and Mathematical Morphology

Space, structure, and randomness: these are the three key concepts underlying Georges Matheron’s scientific work. He first encountered them at the beginning of his career when working as a mining engineer, and then they resurfaced in fields ranging from meteorology to microscopy. What could these radically different types of applications possibly have in common? First, in each one only a single realisation of the phenomenon is available for study, but its features repeat themselves in space; second, the sampling pattern is rarely regular, and finally there are problems of change of scale.

This volume is divided in three sections on random sets, geostatistics and mathematical morphology. They reflect his professional interests and his search for underlying unity. Some readers may be surprised to find theoretical chapters mixed with applied ones. We have done this deliberately. GM always considered that the distinction between the theory and practice was purely academic.

When GM tackled practical problems, he used his skill as a physicist to extract the salient features and to select variables which could be measured meaningfully and whose values could be estimated from the available data. Then he used his outstanding ability as a mathematician to solve the problems neatly and efficiently. It was his capacity to combine a physicist’s intuition with a mathematician’s analytical skills that allowed him to produce new and innovative solutions to difficult problems.

The book should appeal to graduate students and researchers working in mathematics, probability, statistics, physics, spatial data analysis, and image analysis. In addition it will be of interest to those who enjoy discovering links between scientific disciplines that seem unrelated at first glance. In writing the book the contributors have tried to put GM’s ideas into perspective. During his working life, GM was a genuinely creative scientist. He developed innovative concepts whose usefulness goes far beyond the confines of the discipline for which they were originally designed. This is why his work remains as pertinent today as it was when it was first written.