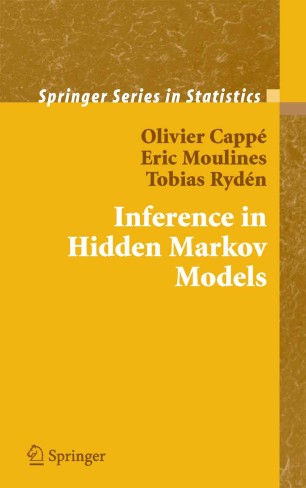 Hidden Markov models have become a widely used class of statistical models with applications in diverse areas such as communications engineering, bioinformatics, finance and many more. This book is a comprehensive treatment of inference for hidden Markov models, including both algorithms and statistical theory. Topics range from filtering and smoothing of the hidden Markov chain to parameter estimation, Bayesian methods and estimation of the number of states.

In a unified way the book covers both models with finite state spaces, which allow for exact algorithms for filtering, estimation etc. and models with continuous state spaces (also called state-space models) requiring approximate simulation-based algorithms that are also described in detail. Simulation in hidden Markov models is addressed in five different chapters that cover both Markov chain Monte Carlo and sequential Monte Carlo approaches. Many examples illustrate the algorithms and theory. The book also carefully treats Gaussian linear state-space models and their extensions and it contains a chapter on general Markov chain theory and probabilistic aspects of hidden Markov models.

This volume will suit anybody with an interest in inference for stochastic processes, and it will be useful for researchers and practitioners in areas such as statistics, signal processing, communications engineering, control theory, econometrics, finance and more. The algorithmic parts of the book do not require an advanced mathematical background, while the more theoretical parts require knowledge of probability theory at the measure-theoretical level.

Olivier Cappé is Researcher for the French National Center for Scientific Research (CNRS). He received the Ph.D. degree in 1993 from Ecole Nationale Supérieure des Télécommunications, Paris, France, where he is currently a Research Associate. Most of his current research concerns computational statistics and statistical learning.

Eric Moulines is Professor at Ecole Nationale Supérieure des Télécommunications (ENST), Paris, France. He graduated from Ecole Polytechnique, France, in 1984 and received the Ph.D. degree from ENST in 1990. He has authored more than 150 papers in applied probability, mathematical statistics and signal processing.

Tobias Rydén is Professor of Mathematical Statistics at Lund University, Sweden, where he also received his Ph.D. in 1993. His publications include papers ranging from statistical theory to algorithmic developments for hidden Markov models.