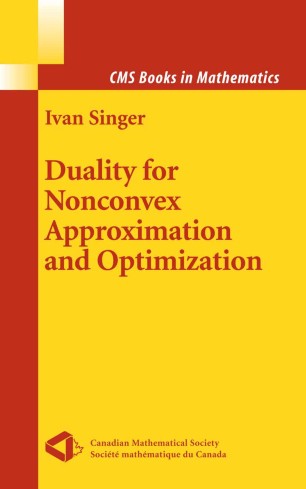 Duality for Nonconvex Approximation and Optimization

In this monograph the author presents the theory of duality for

* duality for worst approximation (i.e., the maximization of the

distance of an element to a convex set)

* duality for reverse convex best approximation (i.e., the minimization of

function on a convex set)

convex function on the complement of a convex set)

Detailed proofs of results are given, along with varied illustrations.

While many of the results have been published in mathematical journals,

this is the first time these results appear in book form. In

addition, unpublished results and new proofs are provided. This

Mathematics in Bucharest, and a Member of the Romanian Academy. He is

one of the pioneers of approximation theory in normed linear spaces, and

of generalizations of approximation theory to optimization theory. He

has been a Visiting Professor at several universities in the U.S.A.,

Great Britain, Germany, Holland, Italy, and other countries, and was the

University. He is one of the editors of the journals Numerical

Functional Analysis and Optimization (since its inception in 1979),

The Theory of Best Approximation and Functional Analysis (SIAM 1974), Bases