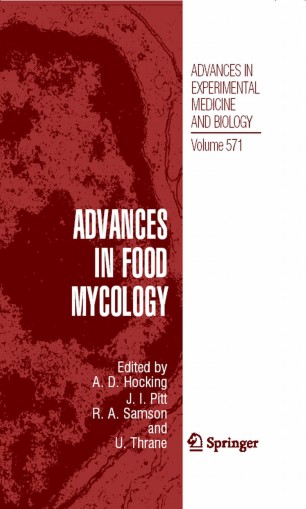 Part of the Advances in Experimental Medicine and Biology book series (AEMB, volume 571)

This book represents the Proceedings of the Fifth International Workshop on Food Mycology, which was held on the Danish island of Samsø from 15-19 October, 2003. This series of Workshops c- menced in Boston, USA, in July 1984, from which the proceedings were published as Methods for Mycological Examination of Food (edited by A. D. King et al. , published by Plenum Press, New York, 1986). The second Workshop was held in Baarn, the Netherlands, in August 1990, and the proceedings were published as Modern Methods in Food Mycology (edited by R. A. Samson et al. , and published by Elsevier, Amsterdam, 1992). The Third Workshop was held in Copenhagen, Denmark, in 1994 and the Fourth near Uppsala, Sweden, in 1998. The proceedings of those two workshops were p- lished as scientific papers in the International Journal of Food Microbiology. International Workshops on Food Mycology are held under the auspices of the International Commission on Food Mycology, a Commission under the Mycology Division of the International Union of Microbiological Societies. Details of this Commission are given in the final chapter of this book. This Fifth Workshop was organised by Ulf Thrane, Jens Frisvad, Per V. Nielsen and Birgitte Andersen from the Center for Microbial Biotechnology, Technical University of Denmark, Kgs. Lyngby, v vi Foreword Denmark.