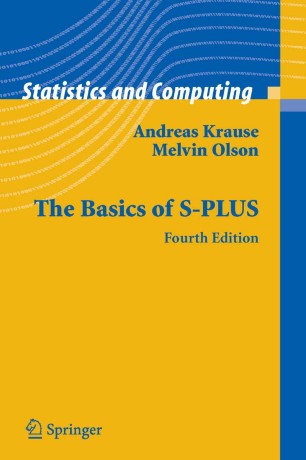 The Basics of S-PLUS

Part of the Statistics and Computing book series (SCO)

This book explains the basics of S-PLUS in a clear style at a level suitable for people with little computing or statistical knowledge. Unlike the manuals, it is not comprehensive, but instead introduces the most important ideas of S-PLUS and R, its companion in implementing the S language.

The authors take the reader on a journey into the world of interactive computing, data exploration, and statistical analysis. They explain how to approach data sets and teach the corresponding S-PLUS commands.

A collection of exercises summarizes the main ideas of each chapter. The exercises are accompanied by solutions that are worked out in full detail, and the code is ready to use and to be modified.

The volume is rounded off with practical hints on how efficient work can be performed in S-PLUS, for example by pointing out how to set up a good working environment and how to integrate S-PLUS with office products.

The book is well suited for self-study and as a textbook. It serves as an introduction to S-PLUS as well as R. A separate chapter points out the major differences between R and S-PLUS.

Over the last editions, the book has been updated to cover important changes like the inclusion of S Language Version 4, Trellis graphics, a graphical user interface, and many useful tips and tricks. The fourth edition is based on S-PLUS Version 7.0 for Windows and UNIX and has been updated and revised accordingly.

"Written to coincide with Version 7.0 of S-PLUS, the fourth edition of The Basics of S-PLUS furnishes a gently paced, but detailed, introduction to the S-PLUS statistical computing environment." Journal of Statistical Software, Vol. 14, December 2005

"Now in its fourth edition, this paperback continues to evolve smoothly, keeping up with changes in S-PLUS and its underlying language, S...If you own a first or second edition of this book, I recommend updating to the fourth edition." Journal of the American Statistical Association, September 2006

"This is the third edition of the book within five years of publication. This gives an idea of the popularity of the book. The basic structure of the book remains the same. But the new edition covers the S-Plus version 6 for Unix and Windows. In particular the contents now reflect introduction of a graphical user interface (GUI), new formats of graphics and for export and import of data. The comparable public domain software R receives a separate coverage as an introduction to R.” (Arup Bose, Sankhya, Vol 64 (3), 2002)

"This is an introductory book on S-PLUS that even first-time users will find accessible, informative, and easy to follow. … One strength of the book is its coverage of several implementations of S-PLUS, in particular of its graphical user interfaces (GUIs) under both Windows and UNIX. … All the while, the book avoids the overwhelming complexities typical of a software manual, and the few, well-thought-out exercises (with careful solutions) at the end of each chapter supply the motivation to explore more advanced topics." (Mario Peruggia, Journal of the American Statistical Association, December, 2002)

"The second edition (2E) was 50% larger than the first edition. This update has considerably fewer changes. … Its inclusion of GUI coverage makes it a good choice for any statistician who wants to get started with S-PLUS." (Technometrics, Vol. 45 (2), May, 2003)

"A basic introduction to S-Plus statistical computing based on version 7.0 of S-Plus. It is suitable for people with little computing knowledge and basic understanding of statistical data analysis. … Overall presentation in this book is good and this book is ideal for a quick basic introduction to S-Plus. It is well suited for self-study and may be considered as a text book for S-Plus statistical computing. If the reader carefully goes through this book, he will acquire substantial knowledge in S-Plus data analysis." (Anil K. Ghosh, Sankhya: The Indian Journal of Statistics, Vol. 68 (1), 2006)