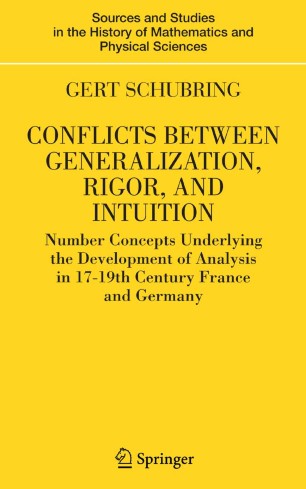 Conflicts between Generalization, Rigor, and Intuition

Conflicts Between Generalization, Rigor, and Intuition undertakes a historical analysis of the development of two mathematical concepts -negative numbers and infinitely small quantities, mainly in France and Germany, but also in Britain, and the different paths taken there.

This book not only discusses the history of the two concepts, but it also introduces a wealth of new knowledge and insights regarding their interrelation as necessary foundations for the emergence of the 19th century concept of analysis. The historical investigation unravels several processes underlying and motivating conceptual change: generalization (in particular, algebraization as an agent for generalizing) and a continued effort of intuitive accessibility which often conflicted with likewise desired rigor. The study focuses on the 18th and the 19th centuries, with a detailed analysis of Lazare Carnot's and A. L. Cauchy's foundational ideas.

By researching the development of the concept of negative and infinitely small numbers, the book provides a productive unity to a large number of historical sources. This approach permits a nuanced analysis of the meaning of mathematical ideas as conceived of by 18th and 19th century scientists, while illustrating the authors' actions within the context of their respective cultural and scientific communities. The result is a highly readable study of conceptual history and a new model for the cultural history of mathematics.