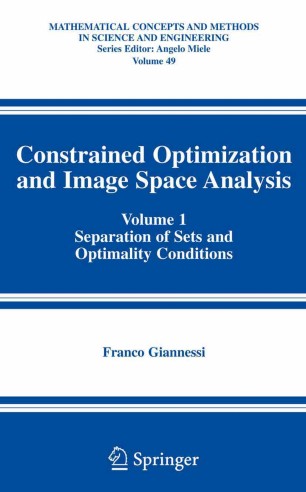 Part of the Mathematical Concepts and Methods in Science and Engineering book series (MCSENG, volume 49)

Over the last twenty years, Professor Franco Giannessi, a highly respected researcher, has been working on an approach to optimization theory based on image space analysis. His theory has been elaborated by many other researchers in a wealth of papers. Constrained Optimization and Image Space Analysis unites his results and presents optimization theory and variational inequalities in their light.

It presents a new approach to the theory of constrained extremum problems, including Mathematical Programming, Calculus of Variations and Optimal Control Problems. Such an approach unifies the several branches: Optimality Conditions, Duality, Penalizations, Vector Problems, Variational Inequalities and Complementarity Problems. The applications benefit from a unified theory.