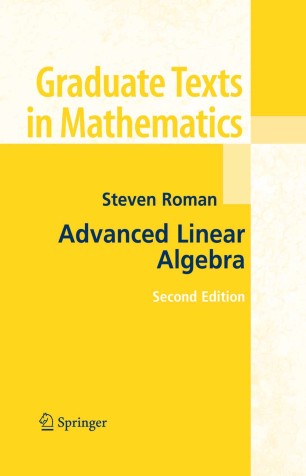 This is a graduate textbook covering an especially broad range of topics. The first part of the book contains a careful but rapid discussion of the basics of linear algebra, including vector spaces, linear transformations, quotient spaces, and isomorphism theorems. The author then proceeds to modules, emphasizing a comparison with vector spaces. A thorough discussion of inner product spaces, eigenvalues, eigenvectors, and finite dimensional spectral theory follows, culminating in the finite dimensional spectral theorem for normal operators. The second part of the book is a collection of topics, including metric vector spaces, metric spaces, Hilbert spaces, tensor products, and affine geometry. The last chapter discusses the umbral calculus, an area of modern algebra with many important applications.

The new edition has been thoroughly rewritten, both in the text and exercise sets, and contains new chapters on convexity and separation, positive solutions to linear systems, singular values and QR decompostion. Treatments of tensor products and the umbral calculus have been greatly expanded and discussions of determinants, complexification of a real vector space, Schur's lemma and Gersgorin disks have been added.

The author is Emeritus Professor of Mathematics, having taught at a number of universities, including MIT, UC Santa Barabara, the University of South Florida, the California State University at Fullerton and UC Irvine. He has written 27 books in mathematics at various levels and 9 books on computing. His interests lie mostly in the areas of algebra, set theory and logic, probability and finance.