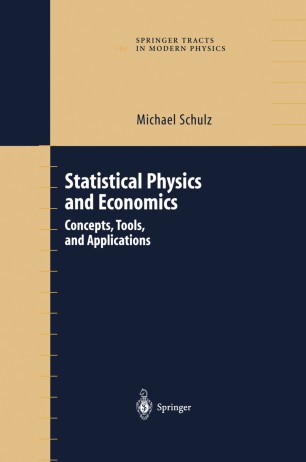 Econophysics describes phenomena in the development and dynamics of economic systems by using of a physicMly motivated methodology. First of all, Mandelbrot had analyzed economic and social relations in terms of modern statistical physics. Since then, the number of publications related to this topic has increased irresistible greatly. To be fair to this historical evolution, I point out, however, that physical and economic concepts had already been connected long ago. Terms such as work, power, and efficiency factor have similar physical and economic meanings. Many physical discoveries for instance in thermodynamics, optics, solid state physics, or chemical physics correspond to a parallel evolution in the fields of technology and economics. The term econophysics, or social physics, also is not a recent idea. For ex ample, in the small book Sozialphysik published in 1925 [221], R. L£mmel demonstrates how social and economic problems can be understood by applying simple physical relations. Of course, the content of early social physics and the topics of modern econophysics are widely different. Nevertheless, the basic idea (i.e., the description and the explanation of economic phenomena in terms of a physical theory) did not change over the whole time. At this point, an important warning should be pronounced.