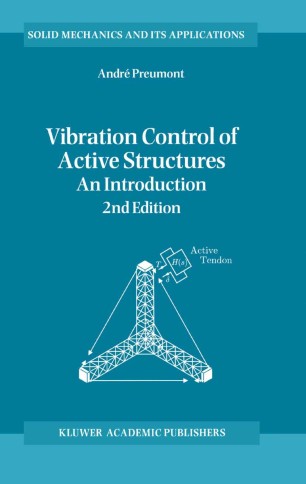 Part of the Solid Mechanics and Its Applications book series (SMIA, volume 96)

My objective in writing this book was to cross the bridge between the structural dynamics and control communities, while providing an overview of the potential of SMART materials for sensing and actuating purposes in active vibration c- trol. I wanted to keep it relatively simple and focused on systems which worked. This resulted in the following: (i) I restricted the text to fundamental concepts and left aside most advanced ones (i.e. robust control) whose usefulness had not yet clearly been established for the application at hand. (ii) I promoted the use of collocated actuator/sensor pairs whose potential, I thought, was strongly underestimated by the control community. (iii) I emphasized control laws with guaranteed stability for active damping (the wide-ranging applications of the IFF are particularly impressive). (iv) I tried to explain why an accurate pred- tion of the transmission zeros (usually called anti-resonances by the structural dynamicists) is so important in evaluating the performance of a control system. (v) I emphasized the fact that the open-loop zeros are more difficult to predict than the poles, and that they could be strongly influenced by the model trun- tion (high frequency dynamics) or by local effects (such as membrane strains in piezoelectric shells), especially for nearly collocated distributed actuator/sensor pairs; this effect alone explains many disappointments in active control systems.